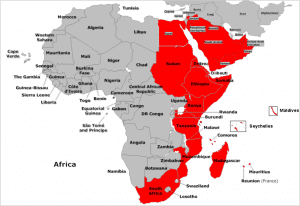 Yesterday I met with representatives from the International Maritime Organization (IMO) to discuss the future of counter-piracy and lessons learned from it. A core issue was the  IMO-run Djibouti Code of Conduct Process (DCoC). DCoC is one of the major responses to Somali piracy that conducts capacity building in the region in order to ensure the building of institutions that can prevent a long term solution to piracy. The management of DCoC will be re-organized in the coming months, the specific Project Implementation Unit shut down and the work transferred to normal IMO desks. This is on the one hand a clear signal of  how mature the DCoC project has become, with one of the final steps, the opening of the training center in Djibouti to be completed this year. On the other hand this development questions whether in future sufficient attention and energy will be invested by the IMO to go further steps in the implementation of DCoC. The visit also allowed for a longer lessons learned interview with Phil Holihead of IMO which is forthcoming with the Lessons Learned Project of the CGPCS.