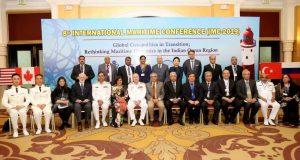 As part of the biennial naval exercise Aman, the Pakistani government is organizing an International Maritime Conference. This years iteration had the theme “Global Geopolitics in Transition: Rethinking Maritime Dynamics in the Indian Ocean Region”. As part of the conference I gave a keynote address on the second day of the event. I argued that Pakistan needs to peer towards the Western Indian Ocean, rather then rely on a broader regional construct and then asked what is the right security architecture for that region. Further information on the conference is available here. Download a copy of my talk here, or read it below.

What is the right security architecture for the Western Indian Ocean?
Keynote Address at the International Maritime Conference 2019, held in conjunction with Aman 19 exercise, Karachi, Pakistan, 10.2.2019

The biannual naval exercise Aman is a good regular opportunity to take stock of how maritime security in the Western Indian Ocean region is developing and to ask for Pakistan’s role in it. There are some positive developments: piracy continues to be contained. Somalia is in a promising recovery process which makes it less likely that piracy will resurface. Yet, mmaritime crimes such as the smuggling of narcotics, or illegal fishery continue to undermine the well being of economies in the Western Indian Ocean. Also, the conflict in Yemen is increasingly putting shipping at risk, with little prospects of how it can be resolved. Tensions in the region associated with great power politics and the unilateral foreign policies of China, the USA and others appear to be increasing.

More efforts in improving maritime security for the region are required. This implies to ask how we can work towards cooperative security and address the shared transnational security threats to shipping as well as coastal communities. In this presentation I like to offer some considerations of how cooperation in the region can be strengthened. I draw on the research of the Safeseas network on the Western Indian Ocean.

The Western Indian Ocean: A promising regional construct
When we talk about security, we often continue to look at the land, and not the sea. Yet, as anyone who has been to the high sea knows, the world looks quite differently if seen from the oceans. Maritime space is vast. Borders at sea are hardly visible. Surveillance and policing the sea is very difficult; capacities are limited; and maritime criminals exploit this. Thinking in terms of maritime regions, is an attempt to consider these challenges as opportunities. The maritime provides the opportunity to bring nations together.

Regions are not naturally given entities, they are political constructs. Recently we see a proliferation of regional maritime constructs. The Indian Ocean is such a construct, as is the Indo-Pacific. Both regions are however simply too broad to provide a deep degree of regional cooperation. The Indo-Pacific is mainly an instrument of grand strategic thinking. Countries such as Australia, Japan or the US, who have advocated for such a region, since they identify it as useful to rethink their strategic role in the world following a geopolitical logic. It is unlikely that the Indo-Pacific becomes useful construct for cooperation.

Many more countries argue that the Indian Ocean should be the region in which to work together. Indeed, the Indian Ocean construct has let to a number of loose cooperation formats, in particular the Indian Ocean Rim Association (IORA) and the Indian Ocean Naval Symposium (IONS). Both are useful institutions. Although they have gained more attention in the past decade, they however have hardly produced any concrete results concerning marine safety and security. There are several explanations for this. One is that there are too many actors and different interests involved, another the lack of resources for this cooperation, but also structural problems, such as IORA’s membership structure and lack of inclusivity.

Why then is the Western Indian Ocean a more promising region? To start with, it is smaller and involves less countries and interests. Secondly, it is a historical space, not only of trade, but also of cultural exchange. Although the colonial experiences differ there is a pre-colonial identity to return to. Thirdly, it is an ecosystem, where what happens on the Asian shores, affects the environment at the African coast. Fourthly, there is a number of security problems shared by all neighbours of the region, of which Somali piracy was perhaps the most prominent. Finally, we find quite a number of attempts to build institutions, or at least proto-institutions for the region.

Many builders, but no architects?
Indeed, quite a number of maritime security cooperation mechanisms have been developed in the Western Indian Ocean region. It seems that the lack of frameworks is not the problem, but how these can be strengthened and relate to each other is the open question. Let me give a number of examples.

The Combined Maritime Forces, known as CMF, and its task forces provides an instrument for joint law enforcement at sea. Pakistan has been contributing to CMF intensively. And indeed, CMF has been quite successful not only in contributing to the containment of piracy but also in addressing the Afghan heroin trade. But CMF remains a loose ad hoc form of cooperation without broader strategy and political buy-in. It is led by the US and dependent on its resources. As such it is at risk to be captured by partisan political interests, rather than serving the region at large.

The Contact Group on Piracy off the Coast of Somalia (CGPCS), has been the key cooperation instrument to address piracy. It also has been instrumental in ensuring capacity building support to the region. It is an important forum because it brings together high-level diplomatic representation, including at ministerial level, with technical expertise. Lately, support for the CGPCS has been crumbling, as could be seen with the lack of representation at the 21st plenary meeting in 2018. It is unclear what directions the CGPCS should take given that piracy is contained now for more than seven years. There are proposals for transforming the CGPCS into a broader regional maritime security mechanism.

The Djibouti Code of Conduct, supported by the International Maritime Organisation is a collaboration between Eastern African and Arab states. Initiated as an information sharing and training platform to address maritime piracy it has since evolved into a broader maritime security framework. The Code is potentially a strong instrument and discussions are underway of how members can move from declaration to strong cooperation.

Finally, last year the Regional Maritime Information Fusion Centre in Madagascar started its work. The ambition of the center is to provide maritime domain awareness for the region. The centre has been quite successful so far in offering a range of products which provide overviews of maritime incidents. It also has facilitated the cooperation between law enforcement agencies on a number of occasions. Yet the center is for now dependent on funding from the European Union, and, so far, only a handful of Eastern African countries have signed a Memorandum of Understanding with it.

In sum, it is not the lack of frameworks that is the problem. It is about how they can be strengthened and work together to serve the interest of the region. In other words, we need strategic thinking for the region that can lead to the development of an architecture. What are the necessary components of that architecture and what could be Pakistan’s role in developing it?

What functions does a security architecture need to perform?
An architecture first of all needs to build on a recognition for the potential of the Western Indian Ocean region and the benefits that can be expected from a cooperation between Eastern Africa, the Arabian Peninsula and South Asia. Secondly, awareness is required that smaller or medium size powers are better of in responding to great power politics through multilateralism which can contain great powers. What would we expect such a security architecture to do? There is a number of tasks, it should provide for. These can be clustered around three dimensions: Knowing the Sea, Governing the Sea, Policing the Sea.

Knowing the sea, implies to develop shared understandings of the situation at sea. What are the threats, issues and trends that require attention? Information sharing and maritime domain awareness is obviously vital here, as are more academic trend analyses. It also includes the sharing of experience and transfer of lessons learned of how to handle maritime security challenges nationally. The region requires knowledge producers. This can build up on the existing centers, including those of the Djibouti Code of Conduct, or the center in Madagascar.

Governing the sea. This implies a political dialogue aimed at finding consensus among divergences, ensuring political commitment to address maritime security in the region, but also keeping the great powers in check. The region lacks such a forum. Formats such as the CGPCS however could be developed into such a direction.

Policing the seas. Maritime security requires a place for informing about intentions, planned operations and lessons from operational experience. It can potentially also imply the planning of joint or coordinated law enforcement operations. Such a function is in the region currently provided, for instance, by CMF. Better policing the regional seas will however imply to identify mechanisms that can go beyond this framework and are regionally led. The regional security patrols of the Pakistan Navy are potential steps into such a direction, as are some of the initiatives of the Global Maritime Crime Programme of the UN Office on Drugs and Crime, such as the Southern Route Partnership or the Indian Ocean Maritime Crime Forum.

If these are the core building blocks for an architecture for the region, what concrete steps could Pakistan take to work towards it? Let me conclude with a number of practical proposals.

Action points for Pakistan
The Western Indian Ocean is the relevant regional construct for Pakistan. As a medium sized regional power, Pakistan is well advised to pursue a regional multilateral oriented foreign policy. Indeed, maritime security provides an opportunity to take over regional leadership by leading on initiatives and becoming a strategic dialogue partner for Eastern African and Arab countries of the region. Concretely this might imply:

Firstly, to contribute to regional maritime domain awareness using the Joint Maritime Information Coordination Center (JMICC) as a tool for diplomacy. The center should cooperate closely with the regional mechanisms including the Djibouti Code of Conduct network, but also the center in Madagascar. Developing shared standard operating procedures and categorisations will be the key.

Secondly, to take over regional leadership by for instance offering capacity building assistance to the Djibouti Code of Conduct countries and sharing operational experience with them, or by leading on initiatives in the Contact Group on Piracy off the Coast of Somalia.

Thirdly, Pakistan should actively work towards and support the proposal for a Western Indian Ocean maritime security forum. Such a forum can be built on the basis of the CGPCS and in cooperation with international partners such as the UN Office on Drugs and Crime’s Global Maritime Crime Programme.

To conclude, the Western Indian Ocean is a major maritime region with huge potential to ensure safer seas and economic prosperity. Working towards a multi-lateral architecture is important to strengthen the region. Pakistan and its navy will be important in that process.