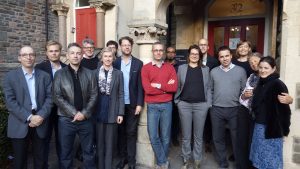 Over the last decade, International Practice Theory has become a strong voice in the repertoire of International Relations theory. A significant number of scholars have engaged in developing a practice-based research and theory for international relations. Practice-driven research remains a very young, dynamic, and highly promising theoretical approach to the study of international relations. Indeed, the practice turn appears to be one of the most productive theoretical and empirical endeavors of IR scholarship in the present decade. Several scholars, each from a slightly different theoretical angle, have introduced practices as an ontological phenomenon and analytical framework into IR scholarship, and spelled out the spectrum and consequences of the practice turn for the field or developed distinct theories and frameworks. With so much theoretical and empirical work already in place it seems to be the right time to pause for a moment and clarify in which sense this community of scholars essentially shares a common agenda, which is broad enough to allow for disagreements and controversies, but which is also recognizable as a distinct type of IR scholarship. To date, no explicit collective discussion has taken shape about the contours that define the practice turn in IR scholarship as a distinct theoretical approach.