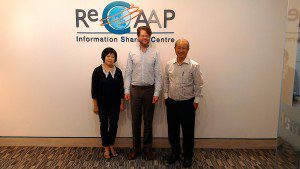 Following my recent visit to the IFC, this week I also had the pleasure to visit the second of the “big three” Information Sharing and Reporting Centres of South East Asia: the Information Sharing Centre of the Regional Cooperation Agreement on Combating Piracy and Armed Robbery (ReCAAP ISC). The ISC was launched in November 2006, and is hence the second oldest centre devoted to piracy (after the Piracy Reporting Centre of the International Maritime Board, IMB PRC). The basis of the centre is a formal multi-lateral (government-to-government) agreement finalized in November 2004 which came into force in 2006. In comparison to IFC, it is hence a more formalized and institutionalized form of cooperation which includes a governing council which steers the work of the ISC. ReCAAP has become a major role model for agreements in other areas, including the 2010 Djibouti Code of Conduct (DCoC) in the Western Indian Ocean and the more recent Yaounde Code of Conduct (YCoC) operating in the Gulf of Guinea. ReCAAP has 19 “Contracting Parties” which includes the East Asian literals, but also a range of European states (Denmark, Netherlands, Norway, UK) and Australia, Japan and the US.

The ISC’s activities fall into three areas: a) collection, verification and dissemination of incident data, b) analysis and research on the basis of that data, and c) training, education and awareness raising. The basis of the ReCAAP system is a national focal point system, an incident database for sharing data, an internet based information sharing app which has a mobile version as well as 16 staff based at the ISC’s office in Singapore’s media town.

ISC collects data on piracy incidents, mainly from the national focal points or independent reports (e.g. from IMB PRC or the media). Data is then verified via the national focal points, shared throughout the network and then compiled to monthly and annual reports. The ISC also provides updates by participating in various events, including the quarterly Shared Awareness Meetings (SAM) of the IFC, or the annual Nautical Forum in which pre-versions of the annual reports are discussed, or organizing events such as the annual piracy conference as part of the Singapore Maritime Week which is mainly focused on scenarios. In the past ReCAAP has also conducted quite substantial capacity building by assisting with the set up of the Eastern African Djibouti Code of Conduct Information Sharing Centers.

The ISC connects different types of national focal points. Some countries have nominated security-oriented operational centers from navies or coast guards, others have nominated civil maritime authorities, or search and rescue center. ReCAAP and the ISC’s work clearly has a less operational orientation then the IFC. While the focal point system disseminates information, the ISC is not geared at speed and/or joint rapid responses and operations to incidents. It’s main function can be seen in awareness raising for piracy, and manufacturing a political consent on how the piracy situation in the region is developing. Arguably the level of trust that ReCAAP developed on a political level was an important pre-condition for developing the IFC, roughly 3 years later. Comparing the centers in the region, exploring the functions they perform and how they work together as an information sharing system is one of the objectives of a paper I am currently developing on the basis of my visits. But first: The industry sponsored IMB PRC is on the list for the next visit.