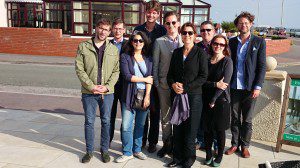 In a workshop titled “At the Boundaries of International Practice Theory: Norms, Pragmatism & Performativity”, from 11-12.9.2014 organized by our project at Cardiff University we discussed the frontiers of International Practice Theory (IPT) and the relations and boundaries to a range of research perspectives which share many of the concerns of IPT.

International Practice Theory is becoming a major framework for the study of international relations. With this development IR follows a broader trend across the social sciences of a theoretical, methodological and empirical renewal that centers on notions of practice. In sociology, management or organizations studies, practice theory has become one of the main perspectives in the core curriculum. In IR practice theory is still in its adolescence and its core contribution to the discipline requires to be refined. International Practice Theory (IPT) draws on and develops core theoretical themes of IR, many of which have been introduced and are discussed as constructivism, pragmatism or as critical theory.
IPT is best understood in broad terms as those approaches studying international politics which are interested in a dialogue with contemporary social theory and sharing a number of core commitments: that meaning requires to be understood in relation to action and situations, that phenomena such as power, facts, political orders, nation states, or regimes, are effects of relations and practices; an interest in what people actually do and say when they engage in practices such as diplomacy, war, organizing the international, or rule-making; the study of how actors adopt and re-invent practices in situations or construct entirely new ones; to develop an understanding of knowledge that does not stand outside of action, but is part of it; to explore how meaning is inscribed in bodies, objects, things or technology and those have an effect on action; to develop an anti-dualistic stance and an ontological parsimonious account that allows to understand how practices unfold beyond conventional micro/macro, local/global, material/social, agency/structure dichotomies; to give primacy to empirical work, initiate research from a stance that seeks proximity to practice and theorize through abstracting from practice; to understand (social) science as a practice that can be grasped by the same means as other practices; a concern for how research has an effect on the world and does not stand outside of the world it describes but is deeply entangled in it.
If the first wave of introducing practice theory to IR has aimed at narrowing down, by offering definitions, by reducing IPT to the works of Pierre Bourdieu or Etienne Wenger or by drawing up boundaries to rationalism, constructivism and post-structuralism, the ideaslab wants to open up. Opening up implies to investigate how research that has been labeled differently is part of or intersects with IPT. This centrally concerns post-structuralism and discourse theory, norm research, pragmatism, as well as performativity studies. Such perspectives share in many ways a common history with IPT by drawing on a line of thinking that includes Wittgenstein and Heidegger. Some theorists such as Foucault have been understood as both practice theorists as well as discourse theorists. Some practice theorists, such as Latour claim to be pragmatists in the first place and develop their line of thinking in relying on the work of Dewey and others. Opening up and exploring these intersections is not primarily an abstract intellectual exercise. Rather it is to recognize and address a number of research puzzles. These puzzles include for instance: the relation between the regularity and creativity of social behavior and the ostensive and the performative; how to understand the normativity of practice; how to conceive of the relation between theory and practice, proximity and distance, as well as the relation between the analyst and the practitioners studied, and the methodological consequences of practice theory. These are some of the core puzzles that need attention. Yet the objective of the ideaslab was not to narrow the discussion down to these, as other ideas, puzzles and problematizations emerge. The intention was to discuss the frontiers of IPT which also includes the question of how to present such research in an intelligible way to the discipline of IR.