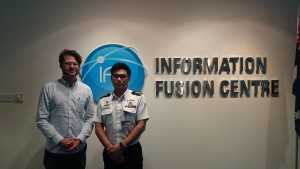 Fusing information from different data sources is one of the major challenges of the maritime security agenda. It is important notably for transnational coordination across the civil-military and public-private divide and to ensure timely responses to emerging threats and incidents. A shared picture of the maritime domain is also a trigger for regional security cooperation. Shared interpretations of the situation and shared securitizations are a known to facilitate maritime security communities. It is one of the lessons from Somali piracy that information sharing works best if it is organized pragmatically. Mechanisms, that thrive without large scale multi-lateral treaties, but work on an informal or technical/operational level are the most effective. In the Western Indian Ocean, the Shared Awareness and Deconfliction (SHADE) mechanism by which naval operations are coordinated is the prime example of such a mechanism.

Yesterday I had the opportunity to visit the Information Fusion Centre (IFC) of the Singapore navy. The IFC is an innovative centre established 6 years ago that develops a shared maritime security picture for South East Asia. This includes piracy hotspots such as the straits of Malacca and Singapore as well as the South China sea. Yet, the IFC does not only focus on piracy, but the broader spectrum of maritime security issues, including fishery crimes and maritime terrorism (but excluding inter-state issues). How does the IFC work? And what can be learned from it for how to handle maritime security coordination?

The IFC is located within the Shangi Naval base. It consists of an operational room staffed 24/7 by the Singapore navy, a dozen of offices for liaison officers, and adjunct to it are rooms for international exercises and simulations. The legal basis of the IFC are a series of Memoranda of Understanding (MoU) between Singapore and participating countries as well as data sharing agreements with other maritime security centres. 23 countries participate in the IFC out of which 15 have presently liaison officers in the centre. The IFC coordination approach centers on two corner stones: the liaison officer system and information technology. The liaison officer system (know for instance also from EUNAVFOR’s HQ) ensures that information can be passed on quickly and that shared evaluations of incidents can be developed in face-to-face interaction. 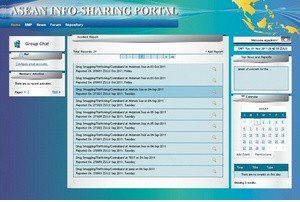 Yet, the information technology system the IFC draws on, makes the centre truly path-breaking and innovative. The basis is an outstanding kit of software titled the Open & Analysed Shipping Information System (OASIS). The system contains vessel information and tracks vessel movement on the basis of the Automatic Identification System (AIS), Long Range Identification and Tracking (LRIT) and IMO data. OASIS stores information about over a million vessels. It was developed by the Comprehensive Maritime Awareness Team from the Defence Science and Technology Agency of the Singapore Government (www.dsta.gov.sg). OASIS draws on an open interface architecture that can be customized to different needs. In addition to the general picture of the IFC, OASIS also provides the basis for different customized portals which includes portals for the Malacca Straits Patrols, the Regional Maritime Information Exchange of the Western Pacific Naval Symposium and the ASEAN Information-Sharing Portal (AIP) inaugurated in 2012. OASIS is web-based and a mobile version exists as well. It also stores information on maritime security agencies and allows efficient communication through chat functionality (comparable to the MERCURY system used in the Western Indian Ocean). To further enhance communication the AIP also includes a live translation tool, by which chat messages are translated into native languages. OASIS also provides the data for an analytical tool called Sense-Making, Analysis and Research Tool (SMART). SMART allows the use to define rules and as such allows, as DSTA describes it, to “piece together vague or partial information that spans organizational, national and time boundaries. SMART ‘connects the dots’ between real-time and archived data, thereby facilitating the investigation of vessels across time periods and identification of emerging trends.”

Like other Maritime Domain Awareness system OASIS/SMART is fully operational, but unfinished and continuously improved. The designers are working on integrating satellite and radar data, developing new predictive algorithms as well as means of integrating criminological data. These improvements will be required notably to address illegal fishing (given that vessels hardly have active AIS or LRIT), but also to ensure that in the process evidence is collected for prosecution and also the coordination between prosecutors is enhanced. The only gap that the system has is a mechanism to voluntarily report the location of naval and coast guard vessels which as the MERCURY system documents, is an important tactical tool to respond rapidly to incidents as well as organize joint patrol and surveillance. OASIS successfully fuses information and SMART provides the analytical tools to map trends and identify potential issues. Combined with the face-to-face coordination of the Liaison Officers and the chat facility the IFC hence provides a sophisticated architecture for maritime security cooperation, rapid reaction as well as analysis.
The IFC also organizes the quarterly Shared Awareness Meetings (SAM) which bring together the regional maritime security community to discuss current challenges (including partners such as ReCAAP, IMB, or the shipping associations). In addition the IFC is also engaged in education, training and exercises, for instance through organizing the ASEAN Maritime Security Information Sharing Exercise (inaugurated in July 2012), a week long, bi-annual Maritime Security Practitioners course as well as regular workshops on maritime security. The IFC is clearly a role model of how Maritime Domain Awareness can be organized and become the seed for stronger, efficient maritime security cooperation. The work of the IFC is funded almost exclusively by the Singapore government, which is a factor that requires to be taken into account when one thinks about whether the model can be replicated elsewhere. Yet, the way that the IFC combines liaison officers in situ, innovative information fusion technology, a chat-enhanced infrastructure, meetings and training components is certainly a productive way forward. Attempts to set up new Information Sharing Centers in the Western Indian Ocean, e.g. by the EU’s MASE project or the Djibouti Code of Conduct process, or on a pan-African level led by the AU’s African Integrated Maritime Strategy have to pay close attention to the standards set by the IFC.

2 thoughts on “A role model for information sharing? Visiting the Singapore IFC”