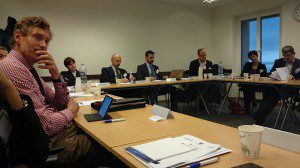 Coventry University’s Maritime Security Programme together with Geneva based Small Arms Survey and NATO’s Science for Peace and Security Programme organized a two day workshop titled “Building Trust to enhance maritime security” The first day of the workshop started with a keynote address by Michel Soula, Head and Deputy Assistant Secretary General in charge for Maritime Security at NATO OPS Division. He gave an overview of NATO’s current maritime operations, the progress in operationalizing the 2011 Alliance Maritime Strategy and prospects for future operations in the field. The second session focused on different understandings of maritime security, the role of non-state actors in maritime security governance and the new horizons that the EU’s maritime security strategy offers. The EU’s approach to maritime security studies was also the emphasis of the third session in which Marcus Houben from the EEAS told the story of the genesis of the strategy, and two presentations on the perspective of Greece and EU Navfor Atalanta were provided. The last session broadened the focus, legal challenges were discussed, whether NATO can play a role in West Africa, what the work of NMIOTC can be in training and capacity building, and a case study of the Baltic Sea was discussed. Day two focused on the problem of arms trafficking by the sea and discussed the different challenges that arise in relation to private military and security companies.

In the workshop I gave a presentation titled “building maritime security communities”. Drawing on an understanding of maritime security communities as ‘communities of practice’ I outlined how trust can be build through joitn projects, shared resources and everyday interaction. I drew on examples such as the CGPCS and the negotiation of its communique, the naval communication platform Mercury, and the information sharing Centres of the Djibouti Code of Conduct.

The clear signal from the workshop was that maritime security is a cross-sectoral issue area of increasing strategic importance of both the EU and NATO. Future challenges that were identified include the coordination between EU and NATO activities, how to do capacity building, how to draw on the lessons from piracy in other areas of maritime security, and how to deal with protracted maritime conflicts, notably in the Mediterranean.