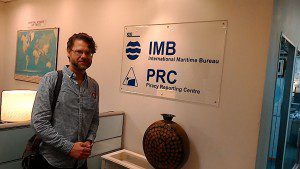 Yesterday, I visited the Piracy Reporting Center (PRC) of the International Maritime Bureau (IMB) at its office in Kuala Lumpur. The IMB works on piracy since its installment in the 1980s, and the PRC is the oldest piracy information sharing center installed as a 24 hours operational center in 1991. From the visit to PRC it became clear how much emphasis this center puts on problemsolving and organizing rapid pragmatic responses by being the first point of contact of the shipping community and getting law enforcement agencies to act. The fact that it is set up as a  non-governmental organization has clear benefits, since the PRC can put different pressure on states, e.g. through the media, then governmental centers can do. As a body, which aims at assisting the shipping industry and seafarers primarily, the IMB, is the Red Cross of the Oceans if it comes to piracy.

The visit completed my tour through the regions information sharing centers. I am currently completing a draft paper on the basis of the results which I will present at the Center of International Law of NUS on the 22nd of April. The paper argues to understand the three centers as a functional system in which each performs a different role. I also ask what the lessons from this system for other regions, in particular the Western Indian Ocean are.